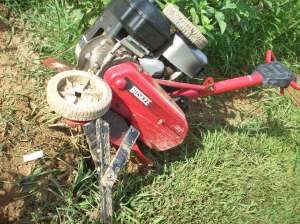 Planting a garden is a journey into the Unknown sometimes.

Of course, one knows what they are planting, but the road to Harvest can get down-right bumpy. Once the garden is planted, that’s the road map and the journey to Harvest is underway.

Along the way, there are unforeseen circumstances like the invasion of the dreaded Colorado Potato Beetles. R.I.P. Red Pontiac Potatoes: I hardly knew Ye.

There are surprising moments of Joy like Zinnia Fest, where literally, tens (!) of friends and family and readers showed up on a lark to check out the garden and to cut some zinnias for their kitchen table.

There are those dreaded moments you know are coming like the slow-but-sure breakdown of my trusty Huskee garden tiller (see above photo!) which first lost one wheel (plastic….ugh), and then another, and then some bolts popped off, and then….I retired the poor beast. R.I.P. Old Red. I knew Ye well.

Finally, one’s destination comes into view along with the journey’s eventual End.

August is the month of Harvest, and at Groundhog Hill this summer, I’ve harvested some pretty tasty green beans, cucumber, and yellow squash. August is also known as The Month of Weeds, and I have those in abundance.

Now that we’re in the Dog Days of Summer (when it’s been raining Cats & Dogs), I see where this year’s journey at Groundhog Hill has led me: To my Dad’s Book Launch Party on Sunday. The Family has rented the Woman’s Club, and I plan to deck out the place with freshly cut Zinnias and Sunflowers.

It’s a simple gesture, but it’s also a Gift. With a big assistance from Planet Earth, I can look about the soon-to-be zinnia-filled room and think, I made These for This!

And that, my friends, is a Journey well worth taking.

Steve La Rue is an internationally recognized leader in Film & Television with 20+ years experience as a Development Executive championing such series as Buffy The Vampire Slayer, The X-Files, The Simpsons, King of the Hill, Battlestar Galactica, and Farscape. He writes, blogs, and consults on All Things TransMedia from his home at the beach in Santa Monica, CA, where he balances his life by surfing every damn day.
View all posts by Surfing Hollywood →
This entry was posted in Weekly Column and tagged Book Launch, Huskee garden tiller, sunflowers, zinnias. Bookmark the permalink.

1 Response to On Journeys & Destinations…